Two merging companies in the field of digital security.

A new global leader and a single brand to launch and to reveal to 3 different audiences (external and internal)
+ 180 countries concerned.
One unique show : “Behind the Curtain”
A one-hour technological show mixing 3 audiences (14000 employees worldwide + 300 international clients, journalists and influencers) to reveal the new brand and launch this new world leader. A daring event that sets the stage for normally invisible data.

“Dive into a world of light and shadow, sounds and silence, nature and technology”. During cold and dark winter time, international light and media artists were transforming the park landscape and parts of the chambers of wonder into an immersive audiovisual open-air art installation. A magical experience of a special kind in the middle of the mountain landscape of Tyrol and under the alpine night sky. This is how the CW celebrate artistic creativity and inspiration.

The story (based on the original concept of the CW by André Heller): The giant (the iconic character of the CW) collected the existing chambers of wonders during his extended trips around the world and every now and then he dreams of his adventures. Each one of the three acts of our show is one of these vigorous, crazy and dramatic dreams telling and showing the guest about the fantastic experiences of the giant: talking animals, magic eyes, giants and cripples, unicorns, elephant heads, witches, medicine men and clowns. 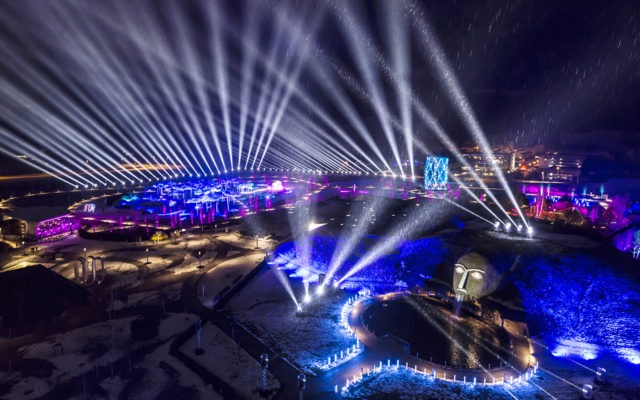 yoga by the bay