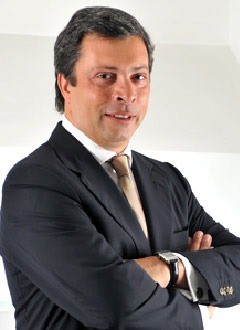 After a degree in Law and post-graduate studies in intellectual property and copyright by the University of Lisbon, he completed the Advanced Management Program at Harvard Business School in 2013. He began his career in 1988, working as a journalist at RTP, Rádio Televisão Portuguesa. In 2002 he moved to Galp Energia, where he was responsible for communication with the media in Portugal and Spain. Two years later he moved to corporate communications at Portugal Telecom. After that, he exercised media relations deputy functions for the Minister of Public Works, Transport and Communication at the XVI Constitutional Government of Portugal. In 2006 he joined EDP, Energias de Portugal, as Brand and Communication Director. Currently, he is Director of Global Coordination of the Brand, Marketing and Communication department and is responsible for communication in Portugal, Spain, the United States and Brazil. Here, he is also Marketing, Communication and Sustainability Director and Administrator at EDP Institute and EDP Comercial. He is part of the board of Directors at Fundação EDP in Portugal. He holds a Vice President role at the Fundação Luso-Brasileira and is part of the Marketer Magazine editorial board. He has been a jury member for several communications, marketing and creativity awards, such as Prémios Meios&Publicidade and Prémios Iade.

Paulo in a few Tweets