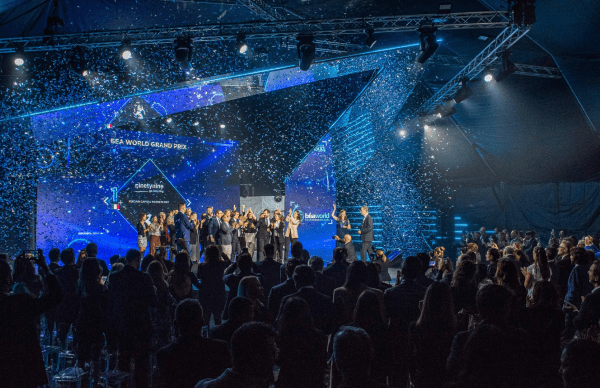 Bea World 2022. In a record edition, with 320 competing events from 32 countries, the Grand Prix goes to Italy: Ferrari Capital Markets Day conceived by Ninetynine for Ferrari comes out on top. Silver for Spain’s La 5ª and Bronze to France’s The Oval Office.

The best event in the world in 2022 is from Italy. Selected on Friday, November 25, at the PratiBus District in Rome, the 17th Bea World was won by Ferrari Capital Markets Day, the project created by Ninetynine for Ferrari. The agency, led by Simone Mazzarelli, also earned the title of Best Bea World Event Agency.

Back to this year’s Grand Prix winner, it was a pioneering project with three events in one: the CMD, the 75th anniversary, and the private preview of the Purosangue. Immersiveness and technology were elegantly dosed for both the Purosangue preview, through a special multi-sensory set-up, and for the introduction of more complex business plan topics, told through an innovative exhibition.

A dynamic LED pathway guided guests through the exhibition up to the lecture hall, representing content that metaphorically passes from the exhibition to the audience and helps shift the atmosphere of the room as the topics discussed change. Produced with innovative independent LED dots technology, the track was turned into the world’s largest-ever screen for the brand’s 75th anniversary celebrations.

The event also bagged two First Prizes (in the B2B Event and Use of Technology categories). Ninetynine stood out among the other nominated agencies for technical innovation, both for the show (that also earned it a Guinness World Record) and for environmental sustainability. With its client Scuderie Ferrari, Ninetynine also won the Second Prize in Integrated Communication Project with the Ferrari F1-75 Global Launch event.

“The curtain comes down on the Live Communication Week after an incredible evening. More than 500 people in the hall from 32 countries celebrated the winners of the 17th Bea World. The joy of meeting up in person again was memorable. The party following the award presentation turned into a real rave party, but fortunately no one was arrested! Many thanks to everyone who collaborated with ADC Group and made this international event possible. See you all next year. Where? The destination is still shrouded in mystery. Stay tuned!”

That is how ADC Group President Salvatore Sagone, celebrated this record edition of the international award. 320 entries (+20% compared to last year’s 268) from 97 agencies took part in the second edition of the LCW events’ marathon, staged in Rome between November 22-26, and which began with the 19th edition of Bea Italia.

The awards ceremony (which was also streamed live thanks to the Digivents web app), was hosted by Jan-Jaap In der Maur and Sandy Nijhuis of Masters in Moderation (Content partner), while the direction was entrusted to Alessandro Torraca.

WATCH THE VIDEO RECAP OF THE EVENING

BROWSE THE GALLERY ON FB

“The jury looked at the candidates for the Bea World Grand Prix with at all the evaluation criteria top of mind. Based on that we selected the Ferrari Capital Markets Day as the winner. We were very impressed with the great execution and overall quality of this event. Especially looking at the sheer complexity of the project and having three events in one. The ambition level of the event with the world returning from a pandemic is worth mentioning. The innovation through usage of technology and turning a racetrack into a fully immerse experience for the guests was just an extraordinary example of creativity. On top the ISO sustainability certification for such large event, its business results and the relevance to the Ferrari brand all added to our decision to select this event as the winner of the Bea World Grand Prix First Prize.

In second place we decided for the Unstoppable Impulse Event by CUPRA.  A very complex and ambitious project that performed very high in all criteria with superb execution and overall great quality. Great business results and creative usage of the abandoned race circuit, even without existing infrastructure and just 90 days to set-up added to our selection. Great innovative usage of technology and fully immersing people in the brand making it extremely relevant for the target group. A great example of a brand that has made a very ambitious return to live communication post pandemic.

In the third place we selected Vies Brisées (Shattered lives). This event touched the jury in an emotional way. We were impressed with the creativity of delivering such strong message to the target audience with this live commuinication project. A flawless execution with great results all very relevant to their set objectives made this project win the third prize.”

The Silver GP went to Spain for Unstoppable Impulse Event by the agency La 5ª for client Cupra. The same event was also awarded two First Prizes in the Convention and Unexpected Use of Space categories, and one Third Prize in the B2B Event section.

An unconventional 6-day event for six different audiences at the Terramar Circuit to communicate the vehicle manufacturer’s Unstoppable Impulse. An impulse that was conveyed from the Barcelona circuit, where the brand was born, to the rest of the world. The event resulted in a journey for guests to discover different zones: from the undercarriage, to the circuit where all CUPRA models were displayed. A catwalk then led them to the Prism, the most representative building of the event, which was located next to the circuit’s main bend – the one that needs to be tackled at maximum speed to get around. The greatest impulse. An unconventional revelation awaited guests within the Prism, as they were able to drive the car before they could actually see it. The focus of the event was to provide total immersion. Outside, a video mapping projection on the same bend, and CUPRA model miniatures racing around interacting with the projection and symbolizing their impulse.

The Bronze GP went to France with Vies Brisées (Shattered lives), created by The Oval Office agency for La Délégation à la Sécurité routière, which also won a Second Prize in Creative Installation, a Third Prize in Non-Profit/CRS Event, a special mention for Best Creativity, and the Press Award.

An unexpected and surprising art installation to alert the French to the dangers of phone use while driving. The star of the event was a high-impact exhibition created in collaboration with artist Simon Berger, famous for his shattered glass portraits.

By breaking glass with his hammer, the artist revealed the faces of road victims killed in the middle of a conversation, and shown on the enormous screens of 5 smartphones (2.5 metres in height) installed in Place de la République in Paris.

As mentioned above, the agency took the second step of the podium in Best Bea World Event Agency, but also won the First Prize in B2C Event with BMW: Moments of inspiration.

Taking the stage at the ADC Group awards were the best practices elected by a corporate jury of leading communication and events managers from around the world, who evaluated the 167 finalist events. President Michiel Pool, Head of Global Events at Ericsson, coordinated the work of the jury.

READ ALL THE WINNERS OF THE 17th BEA WORLD HERE

CHECK OUT THE JURORS’ PROFILES HERE

The People’s Choice Award, voted by the public using the official Festival app by Digivents, went to Luka from Latvia for The Coast of Light event.

During the celebrations, a special moment was reserved for the Ukrainian delegation, who received a warm standing ovation. As you know, Bea World launched a platform at the beginning of the war to support agencies and workers in the country battered by a senseless war.  Here is the link to the initiative https://beaworldforukraine.com

On Friday, November 25, the Bea World awards ceremony brought the curtain down on the global events festival, after a full day dedicated to content through the unprecedented Congrestival formula, which made its debut this year.

Attendees were completely free to move around and visit different stages. Not the usual linear programme involving keynote speakers one after the other, but a set up that resembled a festival, with shorter looped sessions, from 5 minutes to a maximum of 30/45 minutes, and where people could go at their leisure at different times of the day.