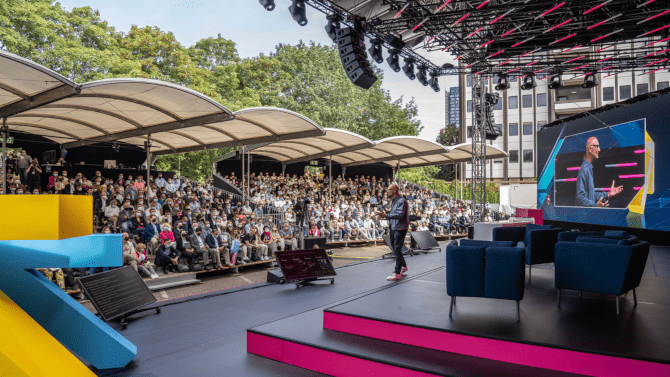 Bea World 2021: The GP to Germany for the Digital X event created by Do It! for Telekom Deutschland. The Grand Prix – Iconic Event Award to the G20 Heads of State and Government Summit by Triumph Group International & EGA Worldwide

At the ADC Group world award, the silver Grand Prix went to Italy for the Ferrari 296 GTB Global Launch event created by Balich Wonder Studio for Ferrari. The bronze Grand Prix was awarded to the All4climate Italy 2021 event by Piano B with MITE for World Bank Group, which also wins the Special Mention in the Sustainable Event category. Auditoire was voted Best Bea World Agency.

The People’s Choice Award was given to #ScoutOn by D&B Eventmarketing, while the Press Award was awarded to Digital X 2021 by Do It! for Telekom Deutschland.

The best event in the world of 2021 is from Germany. The 16th edition of Bea World was won by Digital X 2021 for the project by Do It! for Telekom Deutschland.

DIGITAL X is an event designed to reach more than 20,000 live participants, not in an isolated exhibition hall with artificial worlds, but in the heart of Cologne. An event through which the agency wanted to revolutionize the congress and events market, bringing people together in their everyday life environments (restaurants, cafes, bars, theatres, etc.) to take part in the largest live business festival in Europe. The participants gathered in an area of 2 million sqm, with 5 stages featuring almost 300 Top speakers, 100 locations, entertainment shows, food markets, etc., generating a huge press return across all European media.

“We awarded the Grand Prix to this project because the agency and the client created an experience that fully does justice to the subjects of creativity, innovation, sustainability, and diversity. What impressed us the most was the holistic approach of this activation to revive the entire city right in the middle of the pandemic” These were the words of the jury’s president, Ulrike Tondorf, Head of Live & Experience Branding at AG Bayer, during the award ceremony of Bea World 2021, which took place on Friday, 17 December, at the end of the world festival of events that brought together the international community in live streaming for four days (14-17 December) entirely dedicated to live communication.

“This 16th edition has a special meaning for me, for many different reasons. Firstly, we returned to pre-Covid levels in terms of entries, with 268 projects submitted by 79 agencies from 27 countries. This is clearly in recognition of the value of the BEA brand, which has firmly established itself as an international benchmark for the entire sector. Integrity and transparency have been key features of our contest since its very first edition. These results also confirm that live communication is alive and well, in light of the current situation. It introduces us to a new dimension, onto a ‘new stage’. The pandemic, in fact, has accelerated some processes that already existed before its spread. By this I mean digital transformation, the need to merge the physical environment with the digital one, and sustainability” commented Salvatore Sagone, president of ADC Group, at the opening of the award ceremony, which went live from STS Communication and STS Studio.

And “Welcome to the new stage” is indeed the claim created by FeelRouge – Balich Wonder Studio Business Unit Events and Brand Experiences for this edition of the festival, for which it also delivered the concept, artistic direction, and production.

What are the characteristics of such ‘new stage’ of events? For Salvatore Sagone: “We can certainly speak of a new renaissance of the event industry, in which agencies become 360-degree communicators with a new strategic and holistic approach. We must have access to new tools, which include television production, games, technological skills, social media skills, etc. What we have seen in recent days, and from the winning project itself, is characterized by elements of great innovation and has shown that they know how to interpret the transformation we are experiencing “.

This is also demonstrated by the projects that made it to the second and third steps of the Grand Prix podium.

The idea was to transfer the feeling of Fun To Drive without actually driving, using codes and languages of both the real and the “hyperreal” world. In the Teaser Phase, two real-world and Esports champions challenged each other, revealing the date and name of the event. The Global Première, in live streaming on 4 platforms (and a fifth dedicated to 500 journalists), was built with an extremely demanding technique: a live mix of the language of ‘real’ filming with the language of ‘Unreal’ filming, recreated in Extended Reality (XR) under the supervision of Epic Games. The goal was to convey the feeling of driving the new Ferrari even from afar, conveying the emotions of the “drivers” (the Ferrari management). The launch of the car was also the start of Ferrari’s Rules of driving fun, delivered with a 5-episode video series shot in 5 different countries (Europe, United Arab Emirates, USA, Asia).

The bronze GP went to the Italian event All4climate Italy 2021, organized by Piano B with MITE (the Italian Ministry of ecological transition) for World Bank Group, which also wins a 2nd prize as Cultural, Musical & Sporting event and a Special Mention inthe Sustainable Event category.

All4Climate is the communication campaign, wanted by MITE and the World Bank Group, to raise awareness on the issue of climate change. The creative idea was to build a communication journey that interested all actors and involved all fields: young people, businesses, the government, and artists. All4Climate expressed itself in a precise concept: only if we all act together can we put a stop to climate change. The following were created from this concept:  a digital event from which the 400 young people of Youth4Climate Driving Ambition were selected; a panel with the institutions, young people, and private companies united to find real solutions; and finally, the concert, a global and participatory artistic creation. Thanks to Rockin’1000, the largest rock band in the world, Music4Climate has become the spokesperson for the message “Only by singing all together can we change things”. Great national and international artists sang with them, interpreting the most famous songs of rock music, closing with a remarkable and choral “People have the power” by Patti Smith.

The G20 is a traveling event with an official format and a remarkable ceremonial to mark predefined times with tight deadlines. An annual event that brings together a multiplicity of features linked to the role of participants, generating the richest and most complex of institutional events. The complex organizational mechanism required for the planning, production, and management of the event, may suggest that there is no room for creativity, but this is not the case! Since the pre-existing spaces, some of them historical, have been adapted to specific functions, even different from the intended ones, the level of creativity of the Rome Summit was quite high. The entire EUR district of Rome was “colonized”, hosting numerous exhibitions to enhance the ‘Made in Italy’ concept and the Italian territory.

The best practices elected by the corporate jury, made up of 28 marketing and communication managers from around the world, took to the stage of the ADC Group award and evaluated the 111 finalist events in a long 3-day session. These were coordinated by President Ulrike Tondorf, Head of Live & Experience Branding at Bayer, together with vice-presidents Michiel Pool, global event manager at Ericsson, and Stephanie Dubois, SAP global event director.

“The agencies’ live presentations are always an important moment for us, as they transmit many fundamental elements to those who do our work. We have seen many incredibly creative and innovative solutions on the new stage of events. The projects in competition this year have shown a higher level of confidence compared to last year, in relation to all the innovations introduced in adapting to an emergency situation that has changed its characteristics. Agencies have adapted to the needs of such new scenario, showing great flexibility. Digital, TV, and film formats are used in a more conscious way. Creative approaches, often more sustainable, show that anything is possible and that the live communication industry is changing its skin forever”, commented jury president Ulrike Tondorf.

The Special Awards were also noteworthy:

The French agency Auditoire was awarded Best Bea World Agency, followed by Do It! From Germany, and by the Italian Triumph Group International & EGA Worldwide at 2nd place ex aequo.

The People’s Choice Award, awarded by the public, went to the D&B Eventmarketing from the Netherlands, for the #ScoutOn event of the client Scouting Nederland (Watch the video)

Special Mention for Best Creativity to Gouden Giraffe Event Awards Drive Thru by Xsaga (Netherlands) for EventBranche.nl (Watch the video)

A special press jury awarded the Press Award to the German Digital X 2021 event by Do It! for Telekom Deutschland (Watch the video)

Broadcast in live streaming, the award ceremony was conducted by Jan-Jaap In der Maur and Sandy Nijhuis of Masters in moderation (Content partner), while Roberto Pagliani and Emanuela Littardi were in charge of the event’s direction.

The Bea World Experience in its Full Digital version was created using the Digivents platform.

The support of all partners who collaborated in the making of the Bea World Experience, and the Patronage of the Municipality of Milan, were fundamental.

Special thanks also to Clonwerk for its video graphics production, Plesh for Broadcasting and Interactive Technologies, Consens IQ for the jury’s plenary sessions voting system, WelKom for hosting the content day, and LadyDi for all hostesses/ staff.

Bea World Experience Festival is an initiative by ADC Group, with the Patronage of the City of Milan.