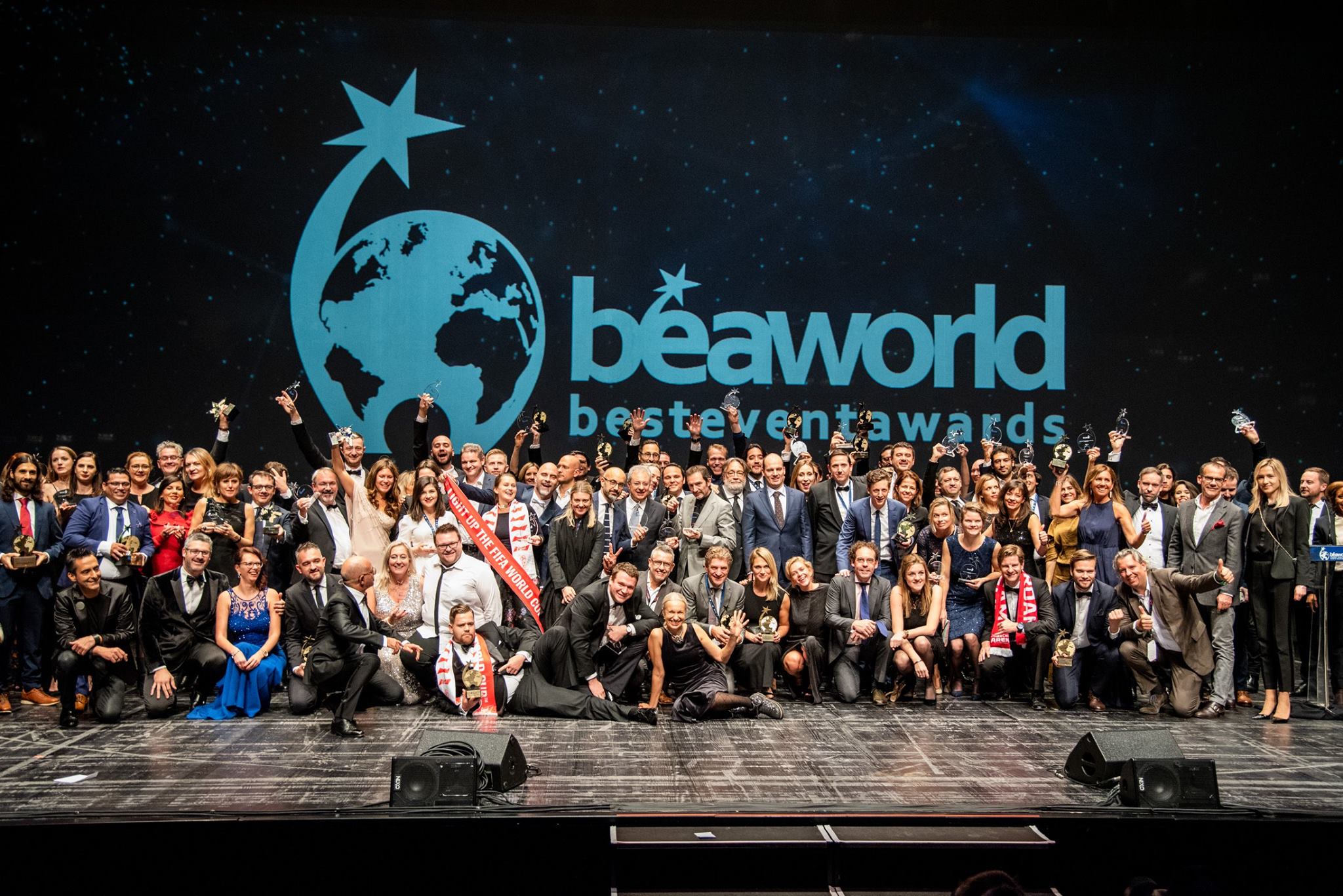 The prestigious Bea World Grand Prix 2018 goes to an Educational/Training Event from India. This was also the first year of the Best Location Awards, assigned to Valencia Convention Bureau and Finlandia Hall. The perfect ending for a record-breaking edition of a 3-day Festival that gathered the most influential community of event professionals from across the world.

November 26th, 2018. The ‘Oscars’ of the events have finally been unveiled. Last Friday night Bea World Festival celebrated its 13th edition awarding the best events of the year worldwide. A parade of excellences shined on the stage of the Grand Auditorium at Convento São Francisco in Coimbra, where over 700 delegates attended the ceremony.

The global contest reserved for events and live communication professionals was once again an exceptional opportunity to receive qualified visibility at an international level. After a full day of live presentations and voting, and very intense debate, the Jury Panel led by Gerd De Bruycker, Marketing Director at Cisco Systems was able to proclaim the winners of 2018, a year with three records established: in terms of entries (303 total submissions, +2.4% compared to last year), competing agencies (122, +10.9% compared to 2017) and countries represented (28).

The Bea World Grand Prix 2018 went to Google Home Training an event by Laqshya Live Experiences (India) for Google. When Google Home was launched in India, the first aim was to launch the product to the sales-staff that needed to know the product first-hand. The event replicated the ‘Escape Room’ format: without prior notice, mobile phones and devices were taken away from the attendees before they entered the venue, and all exits sealed. The only way out of the event was by navigating the training with the help of Google Home. No one could enter, no one leave – till the mission was accomplished 100% with a combination of quick-thinking and problem-solving. A suite at the hotel was done up to look like a Google Home. From the minute the 25 people (per event) walked in, everything from lighting, technical, to the training modules had to be controlled using the Google Home device till they figured out for themselves how the product works and how they could leave the room.

“The Jury decided to award this project with the Grand Prix because of its excellency in all its components” motivated Jury President Gerd De Bruycker. “After identifying the target audience by using data analytics and insights about the market, Laqshya Live Experiences came up with a very creative and fun idea and a flawless execution, paying great attention to business results”.

The Time is Now by The Story Group-Born to Tell Your Story (Italy) for BTicino won a Special Mention for Best Creativity while the Press Award was assigned to Event Horizon 2018 by HiveWise & Media Apparat (Austria) for GridSingularity-Gsy.

“This is our first international award and a proof that we are doing an amazing and creative work”, said Navneeth Mohan, Ceo of Laqshya Live Experiences. His agency entered 4 events, all of which were shortlisted to receive a total of 7 awards. “The Best Event Awards are an opportunity to compare our work and it is great to realise that a country like India is doing projects up to the international standards. We really thank our clients who trusted in a young agency like ours and all the team who worked so hard to make this happen.”

Winners were also proclaimed in 15 event categories and 4 feature categories. It is possible to check all entries and winners on Bea World website.

All Jury members, chosen among corporate event and marketing managers from a representative range of sectors and countries, plus senior representatives of event agencies’ associations from different countries in the world, committed to abide by a Code of Ethics. The result was a transparent, live and face-to face competition that avoided conflicts between Jury members and candidates, by preventing jurors from corporations to vote for a project from their own company and jurors from associations to vote for projects from their own country.

2018 saw also the launch of the first ever Best Location Awards. “Our commitment is to increase the culture of events and live communication worldwide, enhancing all aspects of the value chain”, explained Salvatore Sagone, President and Ceo of ADC Group and Founder of Bea World Festival. “For this reason, launched this year the Best Location Awards, aware as we are that the venue and destination play a fundamental role in the success of any event”. A selected Jury comprising senior representatives of national associations of events agencies from around the world thus assigned the title of Best Destination Convention Bureau to Valencia Convention Bureau (Spain) while Finlandia Hall (Finland) won the Best Congress/Conference/Convention Venue Award.

The ceremony, inspired by the theme ‘Creative Thinking – The Art of Breaking Routines’, was hosted by world-famous Portuguese illusionist Luis de Matos – winner of several important prizes such as the ‘Magician of the year’ (Hollywood Academy of Magical Arts) – who also entertained the audience with his magic.

“We are living a great time full of opportunities for the event industry. Live communication is indeed becoming more and more relevant in the media mix in terms of investments”, said Salvatore Sagone. “This is happening because a new kind of relationship between brands and consumers requires an emotional relationship. Event professionals have therefore to be proud of their job that has a great future, as I am of Bea World Festival that this year has registered another record-breaking edition. And I am strongly convinced that it will grow even bigger in the next future”.

Bea World Festival is an initiative by ADC Group and it is made possible thanks to the collaboration of APECATE, the association that gathers and represents the Portuguese companies of Congresses, Events and Tourism Animation, along with the institutional support of Tourism of Portugal, Tourism of Central Portugal and Coimbra City Council. Bea World 2019 will be held in Istanbul, Turkey.