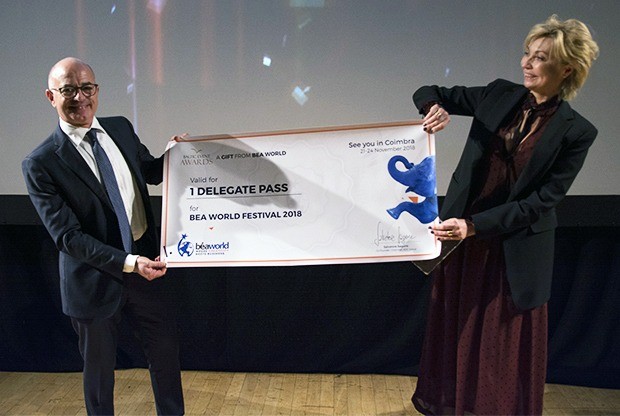 And the winner of the Baltic Event Awards… goes to Bea World Festival!

From the Baltic region to Bea World Festival in Coimbra, Portugal. This is the path reserved for the winner of the Baltic Event Awards, which were celebrated in Tallin, Estonia, last Thursday, 19 April in the context of the Baltic for Events Forum. The winner was Allegro Group, a Polish event agency whose project “Bestsellery Empiku 2017” resulted as the preferred one by the Jury chaired by Salvatore Sagone, president and founder of Bea World Festival.

Do you want to know more about the winning case?
Scroll down, watch the video and read the entry sheet.

Besides winning the Grand Prix, Allegro Group received a special gift from Salvatore Sagone: a free delegate pass for the next Bea World Festival that takes place in Coimbra on 21-24 November 2018. The Baltic Event Awards and Bea World Festival indeed share the same goal to develop and promote the live communications industry respectively in the Baltic Sea Region and in the whole world.

«It was great to see so many interesting projects coming from the Baltic area that might compete globally, and rightfully, with the best of the best at Bea World Festival. We really hope to see many entries and to welcome more and more delegates from this part of the world» said Salvatore Sagone.

«Baltic For Events Forum is the key and most important meeting for event professionals of the Baltic Sea Region. We are glad this year that we had Polish participants in the forum and Polish projects as entries in the Baltic Event Awards. Poland demonstrated amazing achievements and great results. And I’m very happy Allegro will be able to take part in the next Bea World Festival, showing to the world there are wonderful events we are making in the Baltic Sea Region» said Mary Kirillova, CEO of Baltic Event Industry Club.

Click here to see the videos of the winners!

Dates of the event

Empik is a leading Polish commercial chain selling books, international press and media products (including film, music, software and tickets). Bestsellery Empiku gala serves as a culmination of a year-long plebiscite, in which Empik clients “vote” for their favourite books, movies, music and games through daily shopping choices.

It has been organised each year since 2000 and it is one of the largest and most renowned cultural events in Poland. That’s why it is a real challenge to come up with something new in the sphere of the scenography and the creative concept for the event.
Also the last 3 editions of the gala were broadcasted live on national television. Millions of viewers watch it on tv and in the studio there are 700 prominent representatives of culture and show business, whose expectations are not easy to meet.

We also had additional goals:
• to increase television and social media viewership
• to better keep the viewers’ attention
• to improve gala publicity in the media

While working on the creative idea we sought inspiration in the Empik commercial slogan “The most important thing you find inside”.

When considering how to visualize it, we noticed that the place that describes ourselves the best and determines who we are is a living room in our own home. This is a place in which we surround ourselves with the products of culture that are available in Empik stores such as books, CDs, films or games with which we identify. It is a place that we are most comfortable with where we are receiving guests as it shows how we want to be seen by others.

That’s why stage design this year was composed from scaled-up elements straight from the living room, e.g. an enormous sofa, lamp, table, paintings or stairs. All elements were bound together by the “man of Empik” played by a dancer who moved all over the space, interacting with culture.

Our audience can be easily divided into two groups:
1. The general viewer – as the event is transmitted in TVN (one of the 3 biggest TV stations in Poland) anyone can decide to watch it. That’s why we strive to make the best show and gather more viewers than ever before. This year we managed to gather 2,54 million viewers from the 16-49 years old Target Group.
2. 700 prominent representatives from the world of culture and show business. E.g. actors, writers, musicians, publishers, dancers etc.

We completely changed the traditional gala format by resigning from a theatre style – audience with a scene in front of them. This year all viewers could be in the center of action.
We did it by hiding 4 scenes in the 360 degree scenography. Artists performances took place on the main stage in the shape of a “comma” (Empik logo) placed in the center and on 3 stages hidden inside the painting on the wall, on the desk and above the stairs. Each performance surprised viewers with it’s “location”. Viewers could feel that they are “inside” the show.

We had an absolute viewership record!

We’ve achieved all our goals and even exceeded them:
– the innovative formula of the gala attracted 2.54 million viewers in front of TV screens, that’s 43,75% more than a year ago
– tens of thousands watched the broadcast on the internet – together people watched 33 thousand minutes of it
– within just one week of the gala, 718 publications were published, the advertising equivalent of which is estimated at 4,341,560 PLN (1,03 million euros), publications show up even today so finally this number will be much higher
– marketing media in Poland was astonished by this production which resulted in numerous publications like the case study in flagship magazine Think Mice (3 pages and a cover dedicated only to this event)