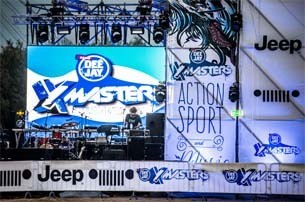 The sixth edition of the 9-day event will take place in Senigallia from July 15-23rd. The area of over 40,000m2 will host competitions in over 25 sports, DJ sets with the artists of Radio Deejay, live performances, screenings and parties.

Deejay Xmasters, the summer event dedicated to sports, music, fun and shows and promoted by Radio Deejay, is back. During the nine days, over 25 sports will be represented in various forms: contests, shows, demos and different activities. The area will also host DJ sets, live performances, projections and parties.

Among the already announced guests there’s surfer Francisco Porcella, a Sardinian Big Wave Rider, who has recently won the XXL Big Wave Award of the World Surf League. This is like the “Oscar” of surfing and he was awarded with the prize for surfing a wave of 22 meters last February in Nazaré, in Portugal.

The second guest of the event is the Olympic silver in Rio De Janeiro Paolo Nicolai, who will take to Deejay Xmasters the second leg of his ‘Paolo Nicolai Under 23’, an invitational championship developed with Red Bull.

Radio Deejay will take care of the musical part of the event, especially during weekends, when Nikki, Aladyn and Shorty will make the crowd dance with live music and DJ sets.

But the core of Deejay Xmasters are the disciplines represented within the event: for the second year in a row, the appointment with Santini TriO Senigallia, the triathlon race scheduled on 15-16th July, has been confirmed. And it does not end here: during the event, national and international competitions in Crossfit and Calisthenics, a match of the Italian Beach Rugby Championship and one of the Stand Up Paddle will take place. And again, skateboard, kitesurf, wakeboard, motocross, dirt bike and parachuting will also be featured.