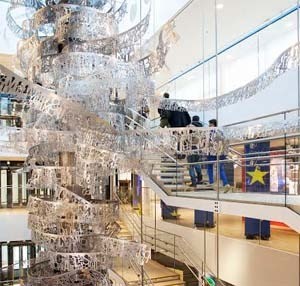 BELGIUM – The House Of European History opens its doors

Antonio Tajani, President of the European Parliament, inaugurated the 4,000-square metre museum, designed by Acciona Producciones Y Diseño, which collects and displays the legacy of Europe and the European Union and is located in the Eastman Building in Brussels.

The House of European History will contribute to spreading the European Union project and the Europe movement based on an design developed by APD in close cooperation with the European Parliament’s House of European history Academic Project team who prepared the content or narrative. The museum combines displays of original items with leading-edge interactive audiovisual elements to recreate Europe’s recent history.

The House of European History spans 4,000 square metres of floor space and offers visitors a collection of objects and documents that reflect the both continent’s diversity and its common roots. The museum project offers visitors content translated into the 24 official languages of the European Union. Visitors are given a tablet to guide them through the museum, automatically translating the content and offering additional information via a range of audiovisuals, pictures, graphics and texts.

The most outstanding item in the museum is an aluminium and steel sculpture 25 metres tall, called Voxtex of European History, that is located in the atrium and rises alongside the staircase to the skylight, traversing all six floors of the building. The sculpture is allegorical of the “union of diversity”.

The first floor houses temporary exhibitions, while the permanent exhibition commences on the second floor and provides an overview of the geographical changes and visions of Europe over time, together with a panorama of the continent’s cultural, social and historical legacy. On the top floor, visitors are invited to participate and express opinions on a range of European issues, learn about Brussels and enjoy an audiovisual that highlights and celebrates the cultural diversity of the countries in the Union.