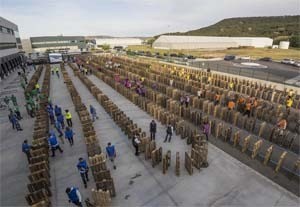 The supermarket chain celebrated its kickoff with those responsible for its logistics centers at its Alcalá de Henares facility. They took advantage of the fact that these are the company’s largest facilities in Europe to develop a large-scale teambuilding activity involving 175 participants.

The agency Eventisimo was responsible for the entire production of the activity, which consisted of creating a domino effect with 1,232 pallets, one for each employee working on the brand’s logistical platforms, which was set in motion with the participation of the 175 attendees of the event.

In addition to the challenge of coordinating the participants and the pallets involved in the activity, they also wanted to surpass the Guinness World Record that consisted of 1,000 pallets and that demanded the English organization to certify the record. After the teambuilding the figure to beat is 1,232 pallets.

The kickoff included as well a dinner at Rafael Hoteles Forum Alcalá, where they showed some images of the day. To conclude the two-day convention, a plenary meeting and two internal workshops were held on Sunday to kick off a training project that Lidl will carry out for a year.