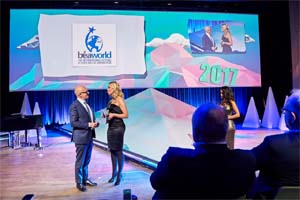 Besides awarding the best live campaigns and events of the year, the Belgian and Finnish awards ceremonies were both an occasion to discover more about Bea World.

The 19th edition of the Benelux Event Awards, organized by Bevas Events and Mojuice, and the Evento Awards, which was held in Helsinki on April 27th, were the perfect occasion to get to know a little bit better what Bea World has in store for this edition.

In fact, both the ceremonies saw the presence of the Bea World team who, after presenting an award and premiering the promotional video for the event, invited everyone to join the special appointment, which will be hosted in Porto in November.

At the awards ceremony in Belgium, the evening was marked by the introduction of more categories in the competition and therefore a higher number of awards than in the previous editions. Among the top winners of this year’s event, the 10 Years Dinner in The Sky, which allowed Events in the Sky & Verhulst Events to win the gold prize in the B2B category, and Antwerp City Drops, a concept imagined and realized by Fast Forward, who won the first prize in the B2C category. In the category Fairs & Shows, which has made its appearance this year, VO Communication has distinguished itself by winning the only gold trophy thanks to the artistic event Art on Paper.

The Evento Awards in Helsinki saw participants competing in 13 different categories: the prizes were awarded, among the others, to Suvi Kallio, Managing Director of the Flow Festival, Woltti Group, Pulp Agency and to the Turku Book Fair.

You can find the images from the Benelux Event Awards here and those from the Evento Awards here.