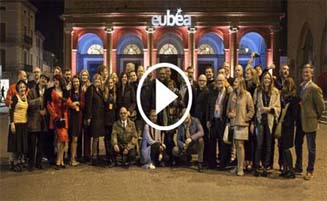 EuBea Advisory Board Meeting in Rimini: the videoreport

The fourth edition of the Advisory Board Meeting of EuBea Festival 2017 was held from March 16th to 18th. Organised by ADC Group, its aim was to give the international event industry a voice in defining the guidelines for the forthcoming European festival of events, scheduled to take place between November 15th-18th in the Portuguese city of Porto.

Rimini and its beautiful sites were the setting for the initiative. First and foremost the Grand Hotel di Rimini, which, in addition to hosting the European representatives of the event industry for two days, was also the chosen location for the meeting of the European events Association LiveCom Alliance and the welcome dinner on March 16th at its La Dolce Vita restaurant.

Meetings scheduled on March 17th were preceded by a site visit of the Palacongressi di Rimini conference centre.

Lorenzo Cagnoni, President of Italian Exhibition Group, welcomed everyone on behalf of the Convention Bureau della Rimini Riviera, which hosted the event, and expressed to all present his satisfaction for the opportunity offered by the Advisory to display the area’s facilities and huge potential to European professionals.

It was then the turn of Ana Fernandes, vice president Apecate, who reported on the advantages of the city of Porto, designated as European Best Destination 2017, and on the locations that will host the next EuBea Festival.

The Festival’s Advisory Board gained momentum with the opening speech by Salvatore Sagone. Assisted by Ilaria Granato, business development manager for ADC Group, he presented data relating to past editions of EuBea Festival and some of the new features for this year, most notably the launch the Bea World.

To facilitate their work, participants were divided into five groups, each of which had the task to carefully examine one specific theme: Content strategy. After a careful debate, each group presented its findings in the following plenary session, during which each participant was able to express its opinion.

Many insights from the session, but one certainty above all: EuBea is a privileged business platform for all players from the events and live communication industry.

At the end of such a successful day, participants were treated to a tour of the city – birthplace of the great film director Federico Fellini – before gathering for dinner. Actors dressed as characters from the most famous movies accompanied the Advisory’s guests.

Guests were able to savour the region’s fantastic cuisine during the closing dinner at the city’s Teatro Galli, which shall be officially inaugurated before summer after careful restoration work. The theatre was also the perfect setting for an amazing video mapping show dedicated to EuBea.

Finally, on Saturday March 18th, the Convention Bureau organised a visit to the beautiful Santarcangelo di Romagna.  A very popular destination thanks to its great location, but also due to the fairs and festivals that attract thousands of visitors all year round. A visit to the area’s historical monuments and the fascinating tufa caves was followed with a cocktail based on traditional dishes at the Lazaroun restaurant.