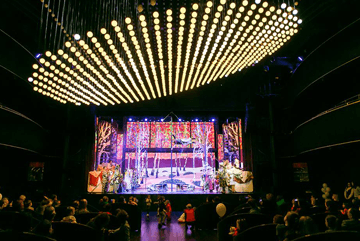 Not only is the Leningrad Center performing arts space a grand and inspiring venue in the heart of Saint Petersburg, it is also the out-and-out place to be on October 14th. Here, on a triumphal night, creativity, innovations, effectiveness and best practices will be celebrated during an extraordinary Awards Ceremony.

Winners of the Best Event Awards 2016 will obtain international recognition in front of the whole European event community and will receive the much sought-after awards: the Elephant trophies. Winners will be welcomed to the Elephant constellation, a metaphor for wisdom, strength, and longevity, as each event worthy of such a name must be.

The Awards Ceremony will be enriched by unexpected performances and will anticipate the closing reception to celebrate winners and all participants alike. The Leningrad Center is the perfect location to host the “event of the events”, being the first show space in Eastern Europe created for the high-style entertainment genre. The venue opened in late 2014 in an old mansion near the Taurida Gardens. The four floors of the building house two theater stages, a gallery, music bars and a restaurant. Leningrad Center presents music and theater shows, performances by internationally renowned stars, film screenings and workshops offered by leading arts and media personalities.