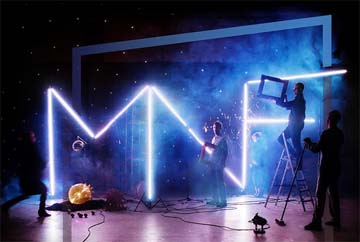 On 5th March 24 Brussels museums opened their doors for 9th edition of this event: an extensive programme was specially devised for the occasion, with lots of original and interesting activities and projects for all the participants.

Are museums still in keeping with the times? On Saturday 5th March, the answer in Brussels was a resounding “yes”. During Museum Night Fever, the annual Brussels museum night, 24 museums opened their doors to the public with an extensive programme specially devised for the occasion.

Almost 500 creative young people engaged with museum collections and temporary exhibitions: dancers, performers, musicians and visual artists as well as students from art schools, conservatoires, academies and social organisations devised over 100 different activities in participating museums. MNF wants to show the museums in a new light: as places of contemporary creation with plenty of room for experimentation and a fusion of disciplines.

The programme was as diverse as the list of participating museums: a tactile path for bare feet, talking walls and vibrating chairs at the Coudenberg archaeological site; a new batch of talented young Belgian musicians and performers who took over the empty rooms of the BELvue museum; chocolate tattoos at Choco-­‐Story; jazz, classical, and big band music played among the vintage cars of Autoworld; art workshops and a catwalk at BOZAR; refugees who gave their personal point of view about Brussels at BIP; a “War Party” at the Royal Museum of the Armed Forces, with 30 young artists drawing inspiration from violence and the stance we take when confronted by it; a dancing fast-­‐food restaurant at the Musical Instruments Museum; à la carte culinary performances at the Belgian Comic Strip Centre; the very first Bibliolympic Games at the Royal Library; dance and collective trance music at the Museum of Fantastic Art; a tapestry weaving workshop at the Museum of the City of Brussels; arty hairstyles at WIELS; acrobatics and Balkan music at the Museum of Natural Sciences.

During MNF, there was also the opportunity to visit several exhibitions: Theo van Doesburg + Daniel Buren at BOZAR, Vincent Glowinski / Bonom at La Botanique (where young people entered into dialogue with the work of Bonom), Edith Dekyndt + Vincent Meessen at WIELS, Agnès Varda + Outings at Ixelles Museum, Atomik Bazar at art & marges and Hamsi Boubeker at the Charlier Museum.

MNF finally drew to a festive close with a huge afterparty from midnight onwards at Bloody Louis in the Galerie Louise. Established and up­‐and-‐coming DJs performed on three stages with an artistic accompaniment of live painting, video mapping and performances.