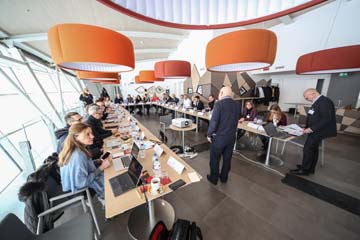 Courmayeur, April 6, 2016. The EuBea Advisory Board gathered on 1st April in the Italian town of Courmayeur to discuss key principles and major improvements to the 11th edition of the International Festival of Events & Live Communication, which will take place in Saint Petersburg on 13-15th October 2016.

EuBea Advisory Board Meeting 2016 from ADC Group on Vimeo.

30 high profile live communication specialists made essential organizational and ideological decisions concerning EuBea 2016 to emphasize the evolution and innovation processes in the European events and live communication industry. Among the Advisory Board members there were representatives of leading multinational companies such as Cisco, Lego, Airbus, Fiat Chrysler Automobiles, Microsoft as well as heads of leading European associations and media and key opinion leaders of the EU industry. Among the important issues discussed were: award categories, improvements to the evaluation procedure, jury members for 2016, content of the conference and key organizational aspects of the festival.

The gathering was hosted by the Aosta Valley Convention & Visitors Bureau, that made an extraordinary venue available for the EuBeaAdvisory Board: the brand new Skyway in the mountains very close to Mont Blanc. This definitely helped to elevate and broaden the Advisory Board members’ spirits and view the situation in a very impressive way, totally reflecting the theme of EuBea 2016: Inspire – Empower – Succeed!

Gerd De Bruycker, Head of Marketing at Cisco for Northern Europe was appointed President of the Jury. He is heading up the EMEA Events Team and is leading the EMEA Marketing Learning and Development Program. He has a passion for sports, events, marketing and building teams. He joined Cisco in July 2010 as the Event Leader for Cisco Live Europe and has since grown his role to include the above marketing roles.

“EuBea’s value lies in setting cutting-edge standards for the event industry and in uplifting the perception of professionalism. I am therefore very honored to have been appointed as President of the 2016 Jury. For all event professionals around Europe, attending the EuBea Festival will be a great chance for networking, exchanging ideas and experiences, and finding valuable content”, claimed Mr. Bruycker.

During the meeting all members of the Advisory Board conclusively agreed upon the definition of an “event”, which is important not only for the festival, but for the whole industry. It’ll help to award worthy participants and define the strongest cases. The EuBea considers an event a live experience, planned in advance, in a limited period of time, with the objective of affecting the perception or behavior of the audience, duly included in the marketing mix.

A key part of the Advisory Board meeting was the presentation of the new host city for EuBea 2016, which is St. Petersburg.

“Every year the ADC Group chooses the new venue for the EuBea festival. The change of venue underlies the concept of the festival, as our goal is not just to award the best of the best, but to create an inspiring environment in order to exchange ideas and develop new business opportunities for top professionals from all over Europe”, Salvatore Sagone, EuBea Festival President and ADC Group CEO, said. “It’s not for nothing that the festival has already been held in atmospheric European cities. It’s quite a logical step to choose St. Petersburg, the cultural capital of Russia, as the venue of the 2016 EuBea Festival”.

“Following the key theme of the XI edition of EuBea – inspire, empower, succeed. – it’s rather symbolic that the location for this edition is St. Petersburg, the cultural capital of Russia, an incredible city which is pure inspiration itself,” – said Nadia Makova, General Producer of EuBea 2016 and head of Live Communication Group, – “The festival is a unique opportunity to open up the potential of our industry and to strengthen the networking between live com experts from all over the EU. As organizational partners we are doing our best to make this EuBea edition not just an event, but a real lifetime experience for every participant“.

Indeed, hosting the 11th edition of the International Festival of Events and Live Communication is very symbolic for the Northern Capital of Russia, which has already hosted such significant events as the G8 and G20 summits, the 36th session of the World Heritage Committee, the St. Petersburg International Economic Forum, and which is now preparing to host the 2016 Ice Hockey World Championship and 2018 FIFA World Cup.