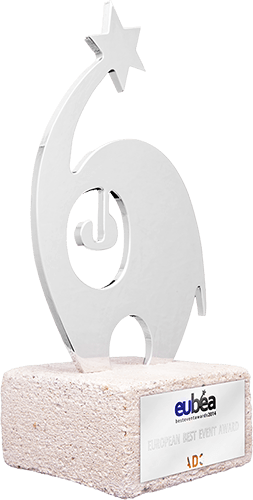 This special edition of EuBea will be the most successful ever. 122 agencies from 21 different countries have entered an outstanding 290 entries in all.  Germany, France, Italy and Russia are the countries with more entries in this record 10th edition.

“Such an amazing result exceeds our best expectations – says Salvatore Sagone, President of ADC Group – and makes EuBea Festival the place to be for the European events community”.

On October 8th, the jury will cast its first vote online to define the short list that will then compete on location, at Seville’s Barcelò Renacimiento, from November 5th to 7th.

The jury, consisting of 30 authoritative members from 15 different countries and representing the most important international corporate brands at EMEA level as well as representatives of trade associations, this year will be headed by Luca Favetta – Senior Director of Global Events and Programs at Hewlett-Packard International.

The short listed agencies will be presenting their events ‘live’, wanting to show their ‘event factor’ to the authoritative jury, in order to conquer the awards at stake:

Besides the above mentioned awards, a further 5 special awards will be automatically assigned on the basis of results achieved in each of the 21 Event Categories, such as Best European Agency, Best Event Company and Best Creative Director of the Year.

Last but not least, the special Press Award assigned by international journalists of the event industry.

Eubea Festival, the International Festival of Events and Live Communication, is a three-day gathering that will be focused on three crucial elements: live show, interaction and networking. Several international key speakers will also attend the Festival and the programme will feature content of the highest level to offer new insights even to seasoned and experienced professionals.

EuBEA Festival will be hosted in the Andalusian city again, thanks to the interest shown by a number of Spanish entities, such as Seville’s Convention Bureau, Tourespaña – the Department of Tourism and Commerce, Tourism Andalusian, the city of Seville, Province of Seville and the Chamber of Commerce.

Early Bird tickets are available at http://www.beaworldfestival.com/buy-delegate-pass/ until October 10th.