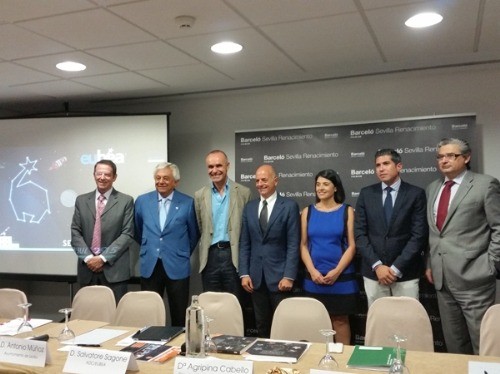 The city of Seville to host the 10th edition of the European Best Events Awards from November 5th to November 7th 2015.

The event will bring together more than 500 professionals from the top international events and marketing agencies.

Next November, for the second time, Seville will have the privilege to host EuBea – the International Festival of Events and Live Communication and  the tenth edition of EuBea – European Best Event Awards – an event that rewards the best European events in different categories of production and execution and brings together more than 500 European professionals of the sector. The event was presented on monday during a press conference in the presence of representatives of institutions and companies that make such happening possible in Seville.

Institutional and corporate representatives expressed their gratitude to ADC Group’s president, Salvatore Sagone, for his commitment and loyalty to Andalusia and the city of Seville in particular, chosen as the location for the event for the second consecutive year and the only locality out of Italy where it has taken place until now. During the presentation, the city and its province were praised for being “a sure bet in welcoming meetings of this type”, with an aptitude in facilitating direct contact between supply and demand, a notion that is also a great tourist opportunity for the city in the presence of the sector’s finest professionals.

The European Best Events Awards, which takes place annually since 2006, is focussed on recognising and rewarding the best creative agencies of Europe’s events and their best clients (first level international companies). This year we celebrate its tenth anniversary and, as his president Salvatore Sagone, announced, it will assemble hundreds of professionals from 30 European countries, six more than in the previous edition. It is pred 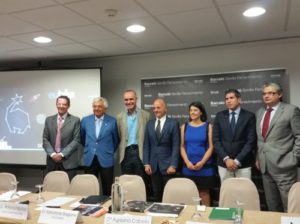 icted that this year participation of companies that present events will be more than those attending the last edition of the festival, which counted 163 events from 81 agencies and considered by Sagone as a “big platform for events’ companies and unique in its type in Europe”. Local companies, which cooperate with the Seville Convention Bureau of this sector and attend the festival, will have the opportunity to “enjoy live presentations” of the best events together with a prestigious international jury, which will evaluate the quality of each event according to its category. EuBea 2015 will take place from November 5th to November 7th at the Hotel Barceló Sevilla Renacimiento, combining conferences, meetings and training sessions and concluding with its own gala awards ceremony.

The Seville Convention Bureau – which depends on the Seville Chamber of Commerce – the Tourism Department, the provincial and city Councils and all its associated companies, hope to increase the demand in tourism and in the meeting and conference businesses  (MICE) in Andalusia, a strategic goal for all institutions and companies participating at this event. The MICE segment expects huge activity for Andalusia’s tourist sector, which “each year attracts 1.76 million professional participants in events, of which more than 600.000 extend their stay in the region by converting into tourists”. It should also be highlighted that as a MICE destination, Seville is “open” all year round, maximising the economic impact and profitability of joining tourism and conferencing, a “segment which generates the major daily expense at an average (173,47 Euro)”, with a total expense in the destination which reaches 282 million Euro.

e was facilitated by the assistance of the President of the Sevilla Congress & Convention Bureau, Arturo Serra; the representative of the Mayor and delegate of Habitat Urbano, Culture and Tourism of the Local Government of Seville, Antonio Muñoz; the provincial delegate of Tourism of the Ministry of Tourism of the Junta Andalusia, Juan Borrego, the President of the Chamber of Commerce of Seville, Francisco Herrero; the Vice President of the Provincial Council, Agripina Cabello and by Juan Jesús Caballero, General Director of Acciona Producciones y Diseño, one of the sponsors of the event, together with more than 50 other companies associated with the Convention Bureau, which provide their services for EuBea.