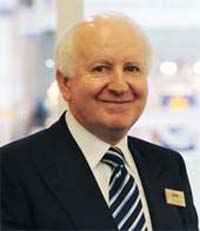 A mood of optimism is evident throughout the worldwide meetings industry after three days doing brisk business, networking and learning at IMEX in Frankfurt which closed on May 21st.

“Feedback from exhibitors and visitors has been encouraging and positive,” said IMEX Group Chairman Ray Bloom (image). “Plenty of business has been done and there are further promising opportunities.”

Ray Bloom continued, “Nearly 9,000 hosted buyers and visitors who came to participate and do business at this year’s show took part in over 62,000 individual appointments, stand presentations and group appointments. More than 50% of appointments included an appointment profile or an RFP, increasing the effectiveness of these meetings. In particular hosted buyers have stayed at the show longer, with Thursday expected to be a particularly strong last day. An important factor in this is that, amongst the 3,900 plus hosted buyers attending, have been many new buyers from countries such as China, India, Brazil, Argentina, Egypt and Israel at IMEX for the first time, making the highest ever number of long haul buyers to attend the show.”

Also, on the show floor, there were 55 new stands and 20% of returning exhibitors increased their space this year. In addition 70 major stands have invested substantially in completely new stand designs including exhibitors such as Portugal, Dubai and Australia.

Ray Bloom said: “This had a great impact in the hall and is clear testimony to their strong commitment and investment in the industry and in IMEX.”

Steen Jakobsen, Director, Dubai Business Events, said: “This year we invested in a new, larger stand design as the show is our best and most important platform for showcasing the Dubai brand and our partners.”

The latest developments to the IMEX education programme have also been well received by visitors particularly several of the creative and innovative sessions.

Highlighting Be Well at IMEX, a new health and wellbeing initiative across the show this year, Ray Bloom reported that, a notable feature of it, the first ever IMEXrun, sponsored by Rio and organised by sports by tlc, was oversubscribed with 250 people from 50 countries taking on the 5km street circuit.