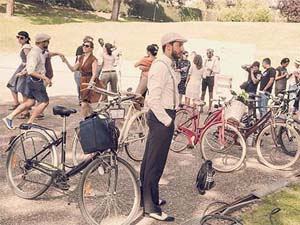 The Tweed Ride Madrid is a bike ride through the streets of the Spanish capital but with a vintage feel, as participants are costumed with classic style of the early 20th century bikes. An original and fun event that features also parallel activities such as dancing, live music, contests or picnic.

Male participants with their tweed outfits and the women that looked like Downton Abbey characters gathered at the three most vintage museums of the capital: the Cerralbo, the Lazaro Galdiano and the Museum of Decorative Arts. Before the actual ride, people had the chance to visit the galleries and have breakfast.

At noon it was time to invade Madrid with an air of the past century and cyclists came from Plaza Colón to stroll through the capital. The final destination of this ‘retro’ ride was a place where their costumes would be more than welcome: the Costume Museum.

The museum’s gardens welcomed the riders with a fun photocall with charleston and swing as soundtrack. To regain energies after the ride, a picnic was organised. The party continued with games, live music, DJs, classic cocktails, lots of dancing and contests in which the sponsoring brands rewarded the most ‘british’ styles through a photo contest on Facebook.