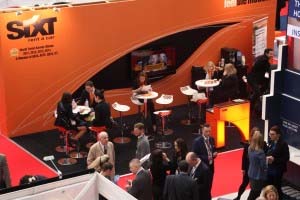 Visitor numbers rose again for the Business Travel Show this year, with early estimates pointing to a 15 per cent increase in attendees. 7,427 corporate travel professionals attended the show compared to 6,459 in 2014, which in itself was a ten per cent rise year on year.

The Business Travel Show is Europe’s leading specialised event for European travel buyers and managers and 2015 was the biggest in the show’s 21-year history with 252 exhibitors, an increase of ten per cent on last year. The show took place in its new venue – Olympia Grand – and three weeks later than normal.

easyJet’s Frederic the rabbit opened the show on Tuesday after walking the orange carpet. Go Native also hosted celebrity chef Lorraine Pascale, who was showing visitors how to cook for one in a serviced apartment kitchen. Kenya Airways and Enterprise sponsored the post show networking dinner and drinks, which featured a personal appearance from charity Born Free and ambassador Peter Andre. £10,000 was raised for Born Free at the event.

“What a fantastic two days we’ve just had – the biggest ever Business Travel Show on record, the highest number of visitors for at least eight years and a return to Olympia, which has no doubt contributed to an amazing feel good atmosphere in the hall. The buzz of buyers and suppliers networking and doing business has been audible throughout the entire show. It’s a wonderful noise to hear and we thank our exhibitors, visitors, sponsors and speakers for making it such a fantastic event,” commented Sam Cande, Business Travel Show Sales Director.