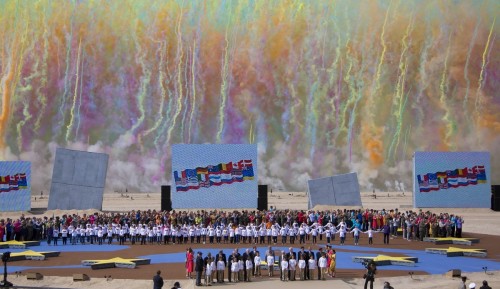 The first prize of EuBea 2014 went to the event created by the French agency Magic Garden for the 70th anniversary of D-Day. It was a real tribute to the millions of soldiers, civilians, victims and members of the Resistance who fought for peace, but also a strong message to young people on the importance of memory, and a reminder of the birth of the European Union, created to fight against the atrocities of the Second World War.

In front of 8,000 spectators, including veterans and their families from 21 countries, 21 heads of state, more than 1,000 journalists and 1 billion viewers, historical events were recreated in chronological order, also through life experiences of the people involved in the event.

The show was divided into four acts and traced the occupation of Europe, the Longest Day, the long road to victory and finally the paths of peace and European integration.

Accompanied by music, a group of dancers, along with 400 volunteers and 150 children from Normandy, staged a choreography to emphasize the message of the entire event while giving it a poetic and contemporary dimension. The show ended with pyrotechnics flights by the military aircraft, which filled the sky with spectacular images.