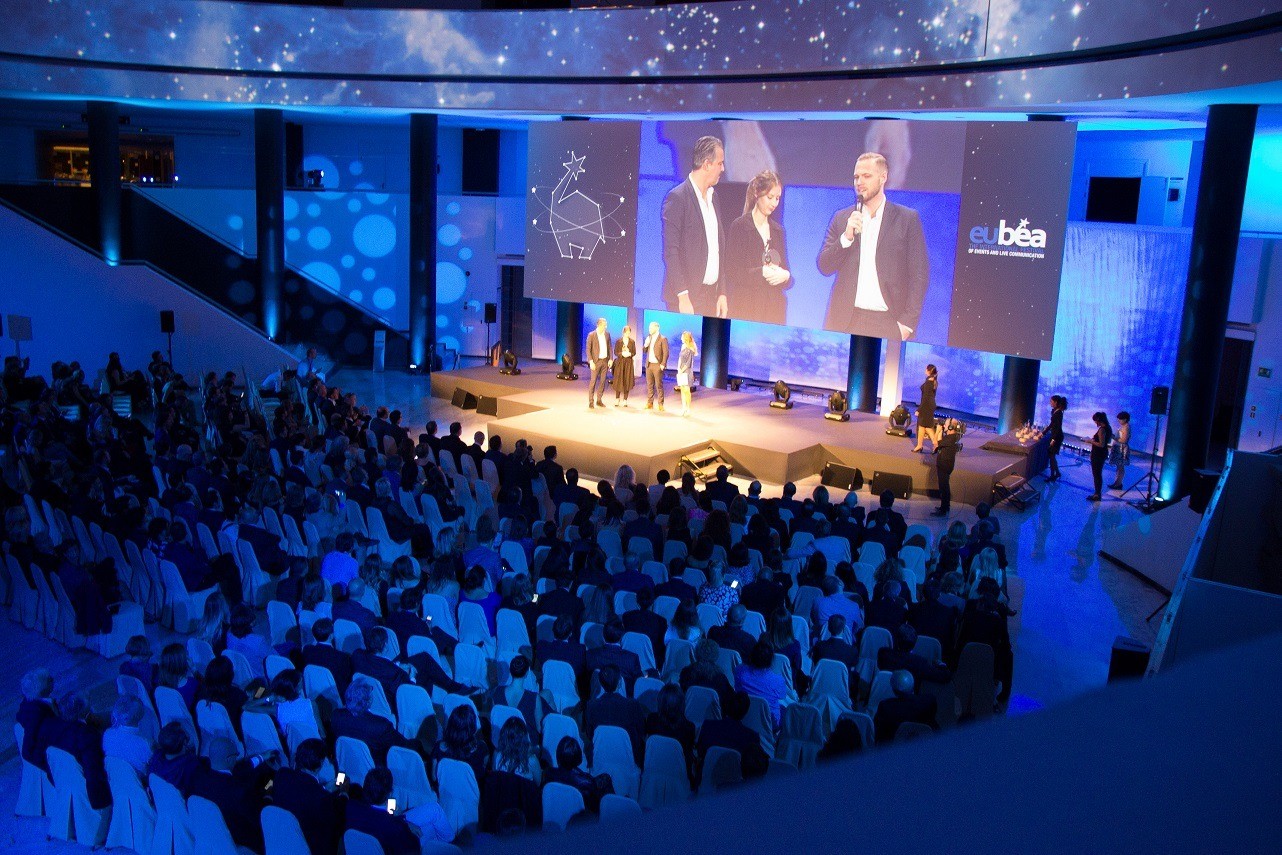 EuBea 2014: Two days of intense training and full of enthusiasm. Discover the Podium

Two days of intense training and full of enthusiasm: the first edition of the EuBea Festival, which saw the participation of 400 delegates from more than 20 different countries, was characterized by a highly participatory and productive atmosphere. The European event industry had a proactive reaction to the initiative of ADC Group. One of the highlights of the event was the delivery of the Elephantines to the best creativity in Europe. On the podium, two French agencies and a Swedish one.

The first edition of the EuBea Festival, which took place in Seville, at the exclusive Hotel Barcelo Sevilla Renacimiento, has come to an end. The event included moments of training, celebration and networking, all focused on three keywords:

The event, organized by ADC Group, was attended by over 400 delegates from more than 20 European countries. All the activities were designed taking into account both the needs of business and networking of the participants and the importance of an effective, engaging and experiential storytelling.

With the participation of the most important agencies, associations and structures that revolve around the event industry in Europe, the second day of the Festival offered a wide range of content designed for training and confrontation and featured interactive speeches by the greatest professionals in the world of events.

Innovation, art, fantasy and emotions are different aspects of a single reality: creative inspiration. Miwa Matreyek and Jack Cooper, responsible for the ‘magic’ effects of Luc Petit Productions, discussed this topic. Two ‘artists’ that, with their speech, told the audience what are the cornerstones to create truly memorable events.

Using the example of Enigma, a permanent show at Cinecittà World, the artistic & creative director of Filmmaster Events Alfredo Accatino explained how to leave a lasting memory also to a diverse audience through projects that represent a perfect combination of technology, visual effects and pure entertainment.

Creativity alone is not enough: we need a meaningful concept and clear objectives to achieve significant results. This is what emerged from the last panel discussion on the second day of the festival, which saw the participation of Luca Favetta (HP), Beatrice Carli Moretti (GlaxoSmithKline) and Björn Wigforss (Microsoft).

The most current issues such as digital, video and destinations were the focus of the first four round tables at the EuBea Festival. The tables format was very innovative: they were physically separated so that attendees could choose where to sit to discuss the theme they preferred.

Catching the attention of the audience is very important and the president of Vok Dams Colja M. Dams suggested to focus on the dialogue between new technologies, multi-channel and live experience, and the combination of the current mega trends.

There are many calls for tenders published by the EU in various fields for which the ‘standard’ rules don’t count. For example: contract prices, no negotiation. These were some of the issues discussed during the speech ‘European Institutional Tenders: What’s in it for european event agencies?’ by Benoit Conti, Euro Tasc Consulting Manager

Searching for Western partners to create projects that satisfy the demands of the Chinese public: this was the idea of ​​the director and writer Shuang Zou, who, along with filmmaker Marco Devetak, created the cross-cultural musical ‘The wonderful adventures of Nils’.

At the end of two days in Seville, the award ceremony of the European Best Event Awards 2014 took place. On stage, to introduce guests and winners, the American Jessica Polsky alongside with the president of ADC Group Salvatore Sagone, who welcomed the large audience. The awards ceremony took place on Friday 24th October, during the EuBea Festival in Seville, at the Hotel Barcelo Sevilla Renacimiento.

The first two prizes of this 2014 edition were won by France, with two different agencies and projects. The third prize went to Sweden.

Besides all the awards, included those classified by typology, the technical excellences and the special awards, the jury has introduced an award that is given to special iconic events. The prize was awarded to Balich Worldwide Shows for the three events at the Olympic Games in Sochi.

This was a record edition, with 163 projects (+ 56.7% vs. 2013), 90 of which were shortlisted as a result of the online voting and the plenary session of the European jury, who met in Seville during the first day of the EuBea Festival and led by Klaus Span, CoE Executive Product Management & Business Development at IBM Power Systems EMEA.

Event: The International Commemorative Ceremony of the 70th anniversary of Normandy Landings

The first prize of EuBea 2014 went to the event created by the French agency Magic Garden for the 70th anniversary of D-Day. It was a real tribute to the millions of soldiers, civilians, victims and members of the Resistance who fought for peace, but also a strong message to young people on the importance of memory, and a reminder of the birth of the European Union, created to fight against the atrocities of the Second World War.

In front of 8,000 spectators, including veterans and their families from 21 countries, 21 heads of state, more than 1,000 journalists and 1 billion viewers, historical events were recreated in chronological order, also through life experiences of the people involved in the event.

The show was divided into four acts and traced the occupation of Europe, the Longest Day, the long road to victory and finally the paths of peace and European integration.

Accompanied by music, a group of dancers, along with 400 volunteers and 150 children from Normandy, staged a choreography to emphasize the message of the entire event while giving it a poetic and contemporary dimension. The show ended with pyrotechnics flights by the military aircraft, which filled the sky with spectacular images.

Watch all the videos of the EuBea Winners on the winners archive section.

Event: All in or nothing

The second prize went to ubi bene, a French agency, for the event organized for the sport brand Adidas.

Two weeks before the World Cup 2014, Adidas destroyed a copy of the bus that the French team used in 2010, from which the players refused to get off for a training session to protest against the decision to exclude from the competition the striker Nicolas Anelka.

In this way, the legendary sponsor of the French team wanted to mark the end of one of the ugliest episodes in the history of football, known as ‘Knysna’s bus of shame’ (from the South African town where the event occurred).

The goal was to use the ‘All in or nothing’ campaign as the main message in the media during the World Cup, creating a spectacular moment to generate buzz and provide a new positive experience.

The event took place in a 1200sqm junk yard in the Paris suburb of La Courneuve and saw the participation of 150 journalists and bloggers, together with  400 ex football players and opinion leaders.

Bronze medal to the Swedish agency A Loud Minority / Conscious Minds with the integrated event ‘Nike Run Viking #runfree’, a project directed especially to the community of runners, but also to all the fans of this sport.

The aim of the event, which used as a setting Iceland’s nature and spectacular views, was to give runners a unique experience, an adventure different from the usual routine that could create a positive connection between the fans of this sport and Nike.

After the #runfree global campaign dedicated to the runners’ community, the agency created a project to encourage runners to upload their most epic runnings.

They created also a call-to-action to challenge runners to take pictures of their runnings every week. The runner who made the most epic one, could have the opportunity to experience the ride of his life with Nike in a location of his choice. Since the winner chose Iceland, they picked the evocative name ‘Nike Run Viking‘.

The agency then took the top 20 viewers of the activities #runfree online to Iceland, along with some representatives from Nike. During three days 6 races were made on the spectacular island and they were shared live (hour by hour), generating more than 3.9 million impressions.

Some pictures were selected on Facebook and then they were used for  the Nike Running campaign on Nike.com.