CZECH REPUBLIC – The future of Congress industry was revealed in Prague

The educational seminar “Trends and Key Driver for Success in the Meeting Industry”, organized by the Prague Convention Bureau, was held in Designhotel Elephant on March 11th. 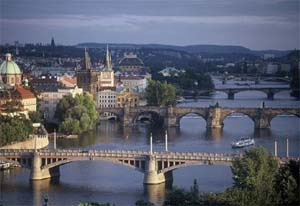 The seminar was opened by Matthias Schultze, Managing Director of German Convention Bureau, who introduced his study “Meetings and Conventions 2030”.

“This extensive study defines 5 key megatrends that shape the congress industry. More than 40% of respondents said that technological development is the most important megatrend which will play the key role in further development of congress tourism and event planning,” said Matthias Schultze. “New forms of information and knowledge transfer will strongly influence all phases of event planning.”

The study also showed that virtual elements are more frequently becoming integral parts of events, and we can expect that the number of virtual events will continue to grow. Other megatrends that were defined by the study are globalization, mobility, sustainability and demography. Especially the aging population and increasing number of women in this field will influence how the “typical conference participant” will change during the upcoming 20 years.

Jakub Dvorácek,CEO of the Association of Innovative Pharmaceutical Industry (AIPI) then spoke about the current issues of the pharmaceutical and medtech industry compliance codes and their impact on medical meetings.

“It is essential that hotels, conference facilities and other conference service providers closely cooperate with local convention bureaux and act together as one “city team”. It is also necessary to establish broader cooperation – on the national as well as international level,” said Martin Sirk. “In addition to collaboration and mutual support of regions within the country, alliances among different destinations are being formed as well. As an example we can mention Barcelona and Vienna who present themselves together in distant markets, while in the European region they act as two independent players. Similarly, Washington D.C. and Brussels, where many international associations are based, help each other, for example when organizing their business activities.”

Martin Sirk also mentioned another current trend – associations are joining in order to find a sponsor for all of their events. Nowadays, it is becoming a necessity to look for suitable partners for particular activities and diversify those partnerships according to the purpose of these activities.

Juan José García, Director of Marketing & Sales of Barceló Congresos, delivered a presentation focused on creating strategic partnerships. He stressed the importance of destination branding, especially creating a great “story” which will sell the destination. Today, it is not necessary to spend much money to promote the destination; there are much more efficient ways how to increase the visibility of the destination at almost no costs. As an example he mentioned references from delegates and event organizers. He also confirmed another current trend – a necessity to provide free Wi-Fi to conference delegates.

The event was held under the auspices of the Deputy Mayor of Prague Mr. Václav Novotný. The main partners of the seminar were the City of Prague, CzechTourism/ Czech Convention Bureau, Prague Airport, Prague City Tourism and Designhotel Elephant, Mikenopa as the technological partner and E15, C.O.T. media publishing house and Event & Promotion magazine as media partners.