The activity formed part of the brand’s Night Master campaign, which invited UK students to pitch their party idea worth £30,000 to a panel of judges. The winning idea came from Jordan Fletcher, a student at Surrey University, who chose an apres ski-themed party. 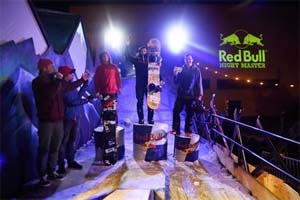 The concept was brought to life on Saturday 8th March and included a 20m long ski ramp, which saw skiers and boarders compete for cash prizes throughout the night. BBC and Winter Olympics commentator Tim Warwood hosted the night, which saw a total of 750 guests attend.

Other highlights of the event included a creperie which provided refreshments throughout the evening. Entertainment came from DJ Charlie Banks who performed a surprise set to the crowds, as well as two fire breathers and a saxophonist and DJ combo. 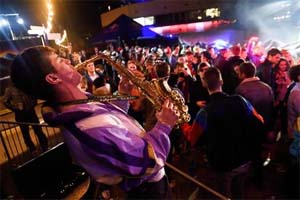 Amplify managed the production of the event in-house, while working with Okoru on the ramp, which specialises in extreme sport production builds.

Jonathan Emmins, founder of Amplify, said: “Aside from transporting 20 tonnes of snow from Milton Keynes the main challenge was ambition versus budget. We wanted to give Jordan and the Surrey students a night to remember. Through careful event design Amplify were able to balance an ambitious concept boosted by some great Red Bull assets – creating a truly unique event for all involved.”