This year’s ITB Berlin sent out very positive signals for the international travel industry. With the global economy expected to recover in the years to come, the world’s travel industry has begun 2014 confident of good tourism business. 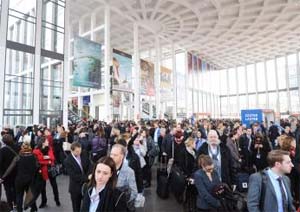 Following a recent period of relatively sluggish growth, particularly in many recession-hit countries, the global travel industry is once again on course for rapid growth. In Germany consumers have ensured that the mood in the travel industry is positive. Backed by a stable employment market, good wage agreements and positive forecasts for economic growth, German citizens aim to spend more money on their holidays than in previous years.

This year’s ITB Berlin reported a 4% in trade visitors and an increase in business volume, which Messe Berlin estimates reached 6.5 billion euros. The focus of the world’s leading travel trade fair was on mobile bookings and on sustainable practices in tourism.

Dr. Christian Göke, CEO of Messe Berlin: “Never before was there such an emphasis on innovation as at this year’s ITB Berlin. The mood among exhibitors and visitors at this year’s show was one of euphoria, which over the last five days could be felt everywhere on the Berlin Exhibition Grounds. The world’s leading travel trade show had an even more positive impact on trade buyers and holidaymakers than in previous years.“

In its role as a think tank, the ITB Berlin Convention has become a firm fixture for trend scouts operating within the international travel industry. Luxury travel was a key topic that attracted keen visitor interest.

The ITB Berlin Convention registered record levels of attendance. A total of 22.000 took part in around 200 lectures, discussions and workshops, over 5 percent more than in 2013. The matchmaking event for bloggers and exhibitors met with an extremely positive response.

More than 60.000 members of the general public came to find out about the wide-ranging information on offer from exhibitors at the weekend and were able to book their tours directly at ITB Berlin.