La 5ª created and coordinated “Fiesta Argentina”, which the

Argentina Tourist Board held on the occasion of Fitur 2014 in Madrid. Over 350 guests heard

stories and discovered secrets about Argentine culture, cuisine, society and sport at this event

held at the Casa de América. 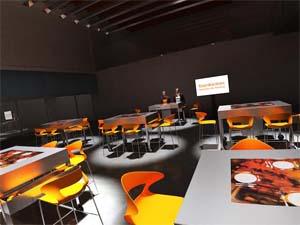 The event was devised under the slogan “Argentinízate” (get argentised), which invited guests

to a celebration/school where they could learn to be real Argentines in an original, participatory

Contents based on the following subjects were collected, designed and produced:

Diversity Zone, where the most curious facts that Argentines already know were

explained; Sports Zone, where guests were able to get on a real motorbike and have their photos taken; Culture Zone, where the Argentine slang and jargon could be discovered, as well as Argentine inventors

throughout history and the country’s Nobel Prize winners; Cuisine Zone, with typical food, such as  charcoal-grilled beef, traditional pies and mate tea.

Last but bot least, the tango: two pairs of professional dancers gave a

demonstration on the main dance floor to introduce guests to the dance.

La 5ª coordinated the catering, based on traditional Argentine recipes, and organised various

event and explained the peculiarities of the country in a personalised way. Passports were also

created, serving as souvenirs/mementos of the event and through their stamps they certified

that each guest had now been “Argentised”.