At this year’s Gala Awards 2014 in Nashville, the agency for events and

twice. Consequently, the coveted prizes in the categories “Most Outstanding

Spectacle” and “Best Event Produced For A Corporation Or Association: Overall 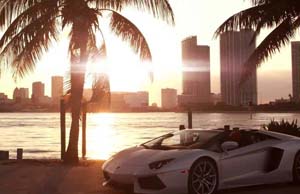 This confirms Vok Dams’ strategy to concentrate its creative potential and

to convert this into spectacular events.

An especially successful example for this is “The Fastest City Takeover Ever!“,

Roadster in Miami, and which was one of the projects honored.

400 international dealers as well as lifestyle- and automobile-journalists

experienced the extreme performance and the elegant design of a world

brand on Miami’s Ocean Drive. It was here, at the “boulevard of the American

automobile elite”, that the official presentation was kicked of.

of several thousand onlookers and became the talk-of-town. At Miami

International Airport, the busiest airport of the United States, a unique high-
speed experiment was conducted: at the runway several Lamborghini

Aventador Roadster sped in front of a Boing 777 – a PR-spectacle, which went

the epicenter of the overall campaign.