The 28th event, organised by Destination Events, incorporated a ‘swinging sixties’ theme. More than 8,500 performers, including acts from overseas, entertained those who attended on the day as well as millions watching the TV broadcast. 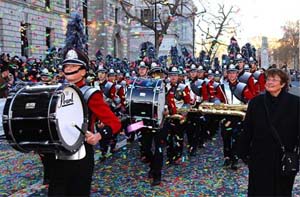 Along the 2.2 mile route, which stretched from the Ritz Hotel to Parliament via Piccadilly, Lower Regent St, Trafalgar Square and Whitehall, 1,500 cheerleaders and 17 marching bands were among those who entertained crowds.

Representatives from London boroughs competed against one another by creating their own sixties-themed floats to land cash prizes for their respective mayoral charities.

Robert Bone, executive director, said: “The conditions were challenging to say the least – but the performers, my team and the spectators rose to the occasion. I think it was the most memorable event in our history.”