The stunt that took place on 1st December formed part of the ‘Light Up Scotland’ campaign, organised by charity HIV Scotland, and included the Emirates Arena in Glasgow, Perth Concert Hall and the Royal Concert Hall in Glasgow, along with theatres, universities, cathedrals and retail outlets, which all changed their external lighting to red. 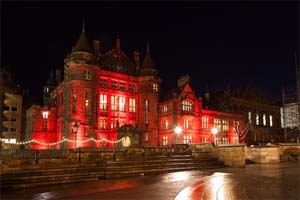 As part of the campaign, a series of community events were hosted in Glasgow, Edinburgh, Dundee, Inverness and Aberdeen to raise awareness of HIV and AIDS.

George Valiotis, chief executive of HIV Scotland, said: “It means a lot to us that so many buildings are taking part. As far as we know Scotland has more buildings turning red for the 1 December than anywhere else in the world. Hopefully seeing a local building or landmark in red will remind everyone in Scotland that now’s the time to learn a fact or two about HIV and AIDS, and to tell a friend.”