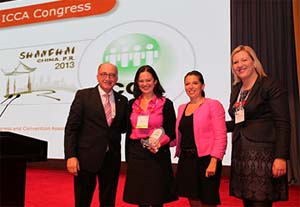 Gdansk Convention Bureau goals were to attract 8-10% more guests to their stand at EIBTM 2013, to have higher quality meetings at the stand, to meet more association and corporate meeting planners and to attract the attention of international media.

They reached these goals by creating a Christmas atmosphere at the Gdansk stand, and engaging visitors to make their own personal Christmas bauble. All baubles were sent to a chosen children’s organization in Barcelona. They also donated 250€ to bring Christmas gifts for the children from the chosen Children’s House, and exhibitors and buyers were informed prior to EIBTM about the possibility to join the project and bring gifts to their stand. After the tradeshow, all exhibitors brought promotional gifts that were left over to the Gdansk stand to donate to children.

“Gdansk Convention Bureau’s campaign stood out because of its simplicity, and shows how you can create a large impact with small means by being creative,” said Simone Sfeir, general manager of Bedouk Event Sourcing Solutions, the sponsor of ICCA’s Best Marketing Award and panel judge. “We thought their Christmas Baubles Campaign was a great CSR initiative that reached their clearly defined objectives.”