Convene has received support from the ICCA for their 2014 show, which will be held on 12-13th February 2014, preceded on 11th February by an education programme. After a successful premiere last year, the Vilnius-based event has made inroads into developing the Baltic Sea Region as a different location for international meetings and conferences. 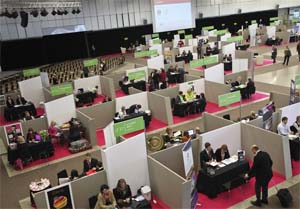 “The Baltic is becoming an increasingly important meetings destination, especially as business and academic connections and relationships emerge and evolve between countries, companies and universities across the whole of the region,” said Martin Sirk, ICCA CEO, in support of the event.

“After a successful first edition in which some exhibitors and 115 selected international hosted buyers who were guests of the Vilnius meetings community joined by more than 100 meeting event planners from within Lithuania, Convene organisers proved that there is a real potential and interest in the region,” Anna Gorska, ICCA CEC Chairperson (Gdansk Convention Bureau/Gdansk Tourism Organisation CEO) explained.

Organisers said that Convene 2014 will have new exhibitors and 30% more hosted buyers.

Hosted Buyer applications, along with exhibitor and visitor registrations for the event, are now being taken at www.convene.lt.