SPAIN – A 3D mapping ‘made in Spain’ in Trafalgar Square

London’s Trafalgar Square became an international soccer showcase when it staged a spectacular, 11-minute 3D show packed with music and an array of special effects based on mapping technology. Spain’s GPD, an Acciona company, was behind the production, and UEFA came up with the idea as part of the run-up to the Champions League Final, held last 25 May at London’s Wembley Stadium.

The 3D multimedia projection brought to life some of the most powerful moments of European Cup history since the competition first kicked-off in 1955, including a tribute to the Cup’s legendary figures-Di Stéfano, Eusebio, Bobby Charlton; Cruyff, Beckenbauer, Platini, Maldini and Raúl Gonzalez-and the winning clubs. More recent events also featured, with a look back at how the 2013 finalists made it to Wembley.

The screen for this event was designed and tailor-made by GPD: it was 21 meters long and 10 meters tall, comprising more than 200 square meters of hexagons that imitated the surface of a soccer ball stretched flat.

The 40,000-watt audio set-up was split between two vertical racks on either side of screen. 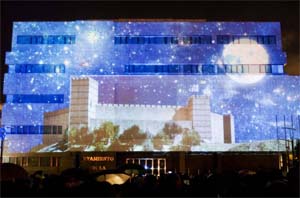 This show is an example of what GPD refers to as “cultural engineering”, a concept that involves using cutting-edge visual and sensory technology to transmit history, tradition and values; in this case, those of UEFA.

In line with Acciona’s total commitment to sustainability, the London spectacular was a carbon-neutral event, i.e. the CO2 emissions that it expected to generate were worked out and were offset through a clean energy project, bringing the overall emissions count to zero.