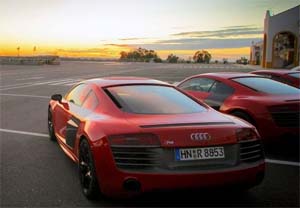 The event was staged first in Plaza de Colón in Madrid between 28 February and 8 March, and then in Plaza de Cataluña in Barcelona from 16 to 23 March.

The show was held in a special geodesic dome. A true landmark in modern engineering, this igloo-like structure was designed and created by the US company Pacific Domes using a sophisticated negative pressure system that makes the metal structure vanish to create a 800 square metre screen.
Measuring 10.5 metres high and with a diameter of 21.7 metres, the dome covers a floor area of around 370 square metres. New Media has the exclusive rights to this system in Spain and is currently one of only four companies in Europe who have access to this type of infrastructure.

The show opened in pitch darkness before an offstage voice announced the start—at which point the rings of the Audi logo were lit up one by one. Later, fast-moving lines appeared from right to left, drawing the outline of the new Audi A3 Sportback. Next, the panel hiding the Audi A3 Sportback, and on which its silhouette was projected, was slowly withdrawn to reveal the real car. The idea was to transmit the sensation of the transformation from virtual to real.
When the car was started, it revolved in a circle and turned to face the audience; the parking lights were turned on to create the idea of movement, in such a way that it seemed as if it were moving forward through an abstract world of lines, spirals and tunnels projected onto the stage.

“It was a truly spectacular event, really impressive and never seen before in Spain”, said Marcos Fernández, Christie Sales Director for Spain and Portugal. “It was amazing to see how New Media made the most of our visualisation technology to produce such a creative and at the same time complex experience”, he added.

“The truth is that this event was totally pioneering in Spain and with this sophisticated equipment we managed to give the audience a completely immersive experience”, claimed Diego de Anna, New Media CEO. “The most complex element of the event was synchronising the show’s various audiovisual and light elements, but thanks to the control systems used and the versatility of the Christie equipment, the integration was a complete success.”

The show itself lasted eight minutes and was screened a minimum of 20 times each day, from 11 in the morning until 9 at night. Between Madrid and Barcelona, around 25,000 people were able to participate in the Audi A3 Experience.