The evolution of EuBea in an advertising campaign

The evolution is the keyword of the new advertising campaign conceived by the agency BBJ. 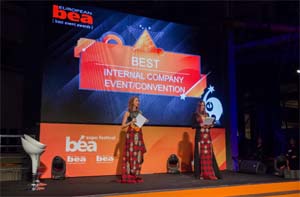 The image has a strong impact: a mammoth, passing through the various evolutionary stages, takes the form of the “historical” elephant, which has become the symbol of excellence in the world of events.

In eight years EuBea has grown in an exponential way. And the numbers of the events entered since 2006 show it.

The evolution has also been enriched by the creation of an Annual that ‘travels’ through the exhibitions dedicated to the event-industry all around Europe.

In fact, the Annual contains all the best events created during the year by corporate and European agencies.

BBJ, a leader agency in the advertising sector, works for such a prestigious project with great enthusiasm. In a brief interview, the creators of the soon-to-be famous advertising campaign explained: “We aimed to emphasize the continuity, the growth and the evolution of the award over the years.
To do so, we chose a simple style that pointed directly to the concept, focusing the attention on the idea: “the evolution”. Then we used the symbol of the award: “the elephant”. We did evolve it, so that it will become the undisputed star of the creativity.”

The call for entry for the European Events Annual 2013 will start on 6th May. The registration into the Annual is the best opportunity in Europe for all the agencies to compete and to be awarded with the coveted Golden Elephant.