Eni is Corporate Ambassador in the Year of Italian Culture

in the United States. The presentation of the event was held in the International

Conference Hall of the Farnesina Palace, in the presence of Giulio Terzi, Italy’s Minister

of Foreign Affairs, John Kerry, the US Secretary of State, and Eni’s President Giuseppe 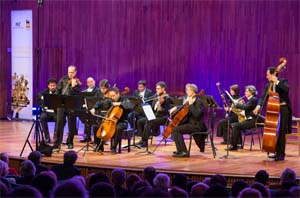 Specifically, Eni will be the main partner in the extraordinary exhibition starting in May at

the Metropolitan Museum of Art in New York, where the ‘Boxer at Rest‘ masterpiece (also

known as ‘Boxer of the Quirinal’, normally held in the Roman National Museum) will be

exhibited for the first time in the US. The bronze sculpture (IV century BC) was found in

1885 in the area of the Convent of St Sylvester on the Quirinal Hill, formerly the Baths of

Constantine. The statue will have a dedicated area from which the public can admire it

and, using special learning tools, learn about its history and artistic value.

Eni has put culture at the heart of its relationships with people and territories.

a word – innovation – that underlies everything the company does. Taking on such an

important role in the Year of Italian Culture in the US is a way of expressing this. It is one

of Eni’s identity values, which adds to the constant and fruitful interaction that has always

characterised the relationship between Eni and the US.

of what the country can offer, to involve and excite Americans, to strengthen the bonds

that already link the two countries and to create new ones. It will also be an opportunity

to present Italy as it is today (with all its outstanding achievements and with its value,

moves forward, plans projects and looks to the future.