In January, the meeting industry of South East Europe was buzzing about Conventa. Between 16th and 17th January 2013, this main South-European trade show for meetings, events and incentives, gathered “crème de la crème” of meeting industry of SEE in Ljubljana, Slovenia. The fifth edition of the trade show made another step towards raising awareness of South East Europe and presenting it as a region with great potential and diversity for meetings and events. 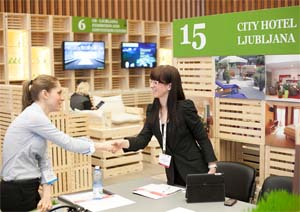 “In January we celebrated the 5th anniversary and Conventa in its fifth edition was a big achievement for the region of South East Europe. It made the Europe aware of the potential of the region for the meetings industry,” said Miha Kovacic, Director of Slovenian Convention Bureau and Conventa Organiser.

Mrs. Karmen Novarlic, MSc, SPIRIT Slovenia, Deputy Manager – Travel & Tourism Sector, added: “In merely five years, the Conventa Exhibition has become one of the key events in Slovenian tourism. This has been proven by the great interest and approval expressed by principal players in business and conference tourism in the region as well as the wider and increasingly visible positioning of Slovenia on the European and global map of this increasingly important segment of tourism.”

This year more than 230 hosted buyers from 26 European countries attended the fifth edition of the trade show. One hundred and thirty-eight exhibitors from Slovenia, Croatia, Austria, Montenegro, Serbia, Bulgaria, Bosnia and Herzegovina, Italy, Macedonia, and for the first time ever also providers from Turkey, exhibited at Conventa.

Being a buyer-driven show, Conventa again offered hosted buyers numerous opportunities for networking and for discussing options for cooperation in the region of SE Europe. Hosted buyers had plenty of possibilities to explore the region. Not only did they get to know the region by meeting with South East European meeting industry suppliers of their choice, but they also had the possibility to experience the region first-hand by attend Conventa fam trips organized to various SEE destinations.

Michael Foreman, Chairman of the Association of British Professional Conference Organisers and speaker at Conventa Academy, said: “After spending three days in the city of Ljubljana I have to say that it really is a gem. It has charm, beauty, friendly locals and facilities to rival many mature conference destinations.”

Rose Padmore, Professional Conference Organiser from Opening Doors & Venues from UK, complimented the event and the SEE region: “We have been beyond impressed by the subtle beauties that all South-East European countries are hiding, their passion for events and willingness to accommodate any and all requests. We would like to extend a whole-hearted ‘Thank You’ to the Slovenian team together with the promise that we will recommend not only Slovenia, but Croatia, Montenegro and Macedonia to our clients for their international events!”