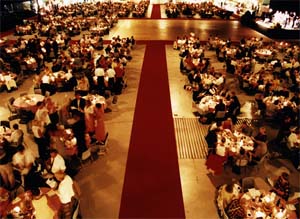 ”The increasing popularity of Copenhagen is partly due to the fact the city’s growing hotel and conference capacity in recent years, and partly because this city has all the necessary ’hardware’ needed; easy accessibility, great infrastructure, state-of-the-art venues and hotel facilities, etc. One of Copenhagen’s strong points is also its high level of scientific knowledge and research, which is key when trying to attract international scientific conventions.” said Steen Jakobsen, Convention Director at Wonderful Copenhagen Convention Bureau.

Also the number of corporate meetings secured in 2012 is record breaking. So far 211 companies have decided to hold their next event in Copenhagen. In 2011, this number was 182.

Among the bid wins, more than 10 are for large conventions with more than 2,000 delegates. One of the conventions secured in 2012 is the World Congress of Psychiatric Genetics (WCPG), which is scheduled to take place in Copenhagen in 2014.

Copenhagen is particularly known for its green profile and has become a frontrunner in staging sustainable meetings. Since some 30,000 people attended the UN Climate Change Conference (COP 15) in the city back in 2009, the Danish capital has become a leader in staging sustainable meetings. To give an example, 64 % of all hotel rooms in Copenhagen are now eco-certified.