During the meeting that was held in late September, over 20 scientists and professors of authoritative Utrecht knowledge institutes were informed of the options for holding congresses in Utrecht. 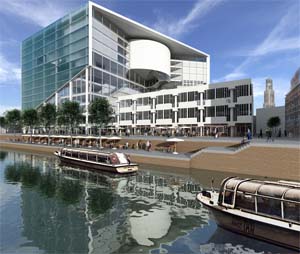 Speakers such as Professor Dr Frank Miedema, UMC Utrecht executive board, and Professor Dr Bert van der Zwaan, Utrecht University Board of Governors, (image) emphasised the importance of an increased number of congresses to be held in Utrecht in the near future. “For years, our studies have shown that, as a city of knowledge, Utrecht has much to offer. In addition, we have to optimally exploit our central location and excellent congress facilities. Through the collaboration in the Utrecht Science Park, we can enhance our position as the ultimate city of knowledge in the Netherlands and provide stimulus to the economic growth and employment in the region. Opportunities are plentiful for active ambassadors,” they concur.
The latter was emphasised by Eric Bakermans of the Nederlands Bureau voor Toerisme en Congressen (NBTC; Dutch Bureau for Tourism and Congresses) and Floris de Gelder, Managing Director of the Utrecht Science Park: “Utrecht is world class when it comes to science; what the harbours are for Rotterdam, the Science Park is for Utrecht.”

Dr Tim Leiner, host of the 24th international Magnetic Resonance Angiography Conference, which was held in September in the UMC Utrecht, shared his experiences as initiator. He said it was a very successful congress with foreign congress participants who were impressed of the magnificent city of Utrecht and the added value of the Utrecht Convention Bureau.
Dr Leiner was also nominated first ambassador of Utrecht (‘Laudatores Trajectini’) and received a certificate from Monique André de la Porte of the Utrecht Convention Bureau.

Since late 2010, the Utrecht Convention Bureau (UCB) supports congress initiators in holding their congress in Utrecht. The independent UCB is part of Utrecht Tourism and informs and consults about the options the city has to offer as a congress destination. The bureau works with a rapidly expanding partner network and avails of practical means such as a convenient congress manual, an online location finder and funding for the production of prospectuses and financing of site inspections.